Large and medium meeting rooms for video conferencing and video conferencing require a Camera capable of scanning and creating depth of image. Complex sound system consists of multiple synchronous microphones, with multiple display screens. The VEDA 705 equipment fully satisfies those requirements. It is suitable for meeting rooms from 10 to 50 people, and depending on the need to upgrade, the hardware can support meeting rooms up to 150 people.

Large meeting rooms often require multiple cameras to record many different angles at the same time. Normally, customers use 03 cameras, including 1 camera for the chairman and 02 cameras for the meeting room. VEDA 705 supports up to 05 cameras. The camera resolution is up to Full HD (1920x1080 @ 30fps), autofocus and exposure. Pan angle from 260 degrees, Tilt 120 to 210 degrees to ensure the most complete recording of meeting photos. The sound system consists of many components: portable microphone system, conference microphone, audio processor with mixer and amplifier, cabinet speaker system and ceiling speakers. The conference microphone system is connected in series. The arrangement of speakers and microphones must be harmonious so that the sound is the most vivid and true, but also ensures optimal support for echo and noise for online meetings and online conferencing. The VEDA line supports 01 Line In connected to the audio processing system of the meeting room in addition to conventional analog microphones. In large meeting rooms, members sitting in locations far from the display often have difficulty keeping track of the meeting. The solution to this problem is typically to enlarge the screen size or use multiple displays arranged in different locations in the meeting room. System integrators must calculate that visual signal is not unduly attenuated and meeting participants are not distracted from distraction. In large meeting rooms, the lighting system is not evenly distributed and is not enough. Optical cameras are often quite sensitive to light intensity as well as light composition. So image quality will be affected a lot without a standard lighting system. System integrators need to calculate in detail the curtain system, white light, yellow light ... to ensure that the camera's recording range, the light is guaranteed. Integration of other systems

Often times, in order to process video effects as well as add images, logos, text or text, system integrators use additional image processing devices. The video signal from the camera before entering the codec will be connected through this device. In addition, video conference systems, online meetings, online seminars are often connected with video / audio devices such as VCD players, Karaoke rigs ... 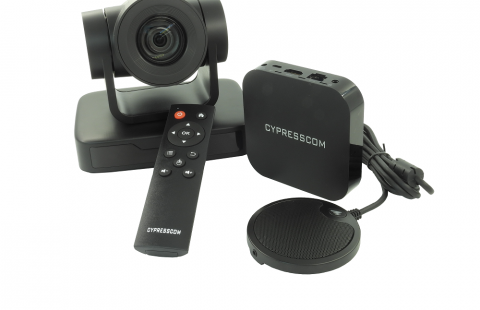